Antonov Airlines has paired up with US-based RXO Air Transport to move a batch of sensitive computer numerical control, or CNC, machinery from Italy to Canada.

The high-tech equipment consisting of five pieces weighing a combined 169 tonnes was transported on board one of the Ukrainian company’s AN124-100s “Ruslan” heavy cargo aircraft in two separate flights from Milan to Hamilton, a port city in the province of Ontario.

Antonov said the machinery would be used to make critical electric vehicle parts. 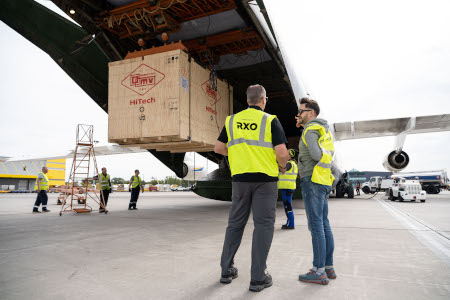 Two external cranes and a reinforced rigid ramp system designed and manufactured by Antonov’s in-house engineers were deployed for loading and offloading the machinery. The ramp system allows a single piece of cargo weighing up to 150 tonnes and measuring 4.1 metres high to be loaded and shipped.

“The peculiarity of CNC machinery is its dimensions. It is narrow and high,” said Olha Danylova, commercial executive for Antonov Airlines.

“Therefore, to put it on the loading ramp and secure it inside the aircraft it was necessary to design a special transport frame. The frame had to be universal to use it for the series of scheduled flights. The light weight was the vital requirement for the frame due to the limited payload for transatlantic air transportation.”

The AN124-100, developed in the 1970s for strategic government purposes, is one of the heaviest cargo aircraft on the market with a gross payload capacity of 120 tonnes.