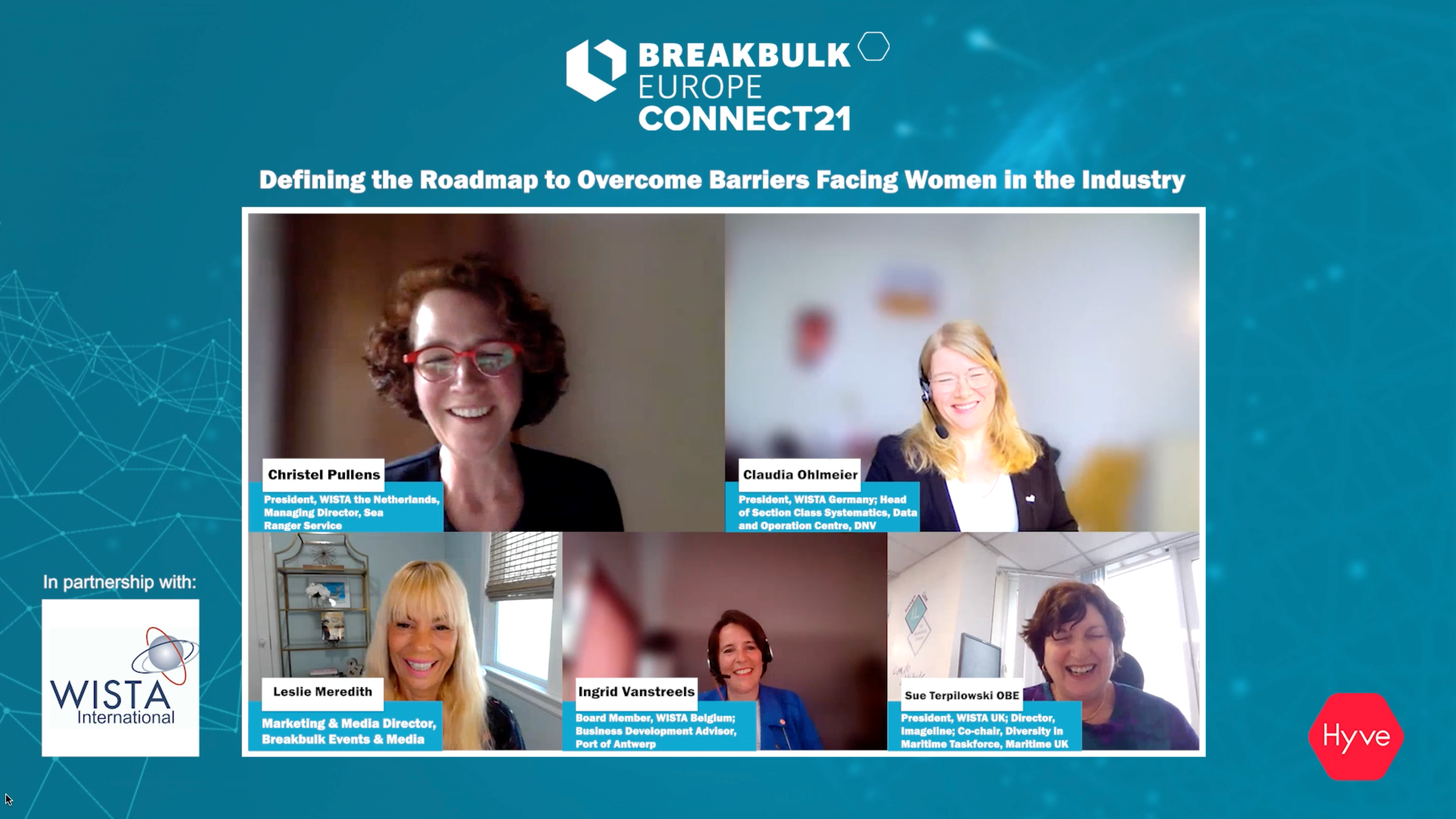 While companies work to remove barriers for employing women in industries including the breakbulk and project cargo sector, paths to career advancement require effort by companies, colleagues and women themselves.

That was the overarching message of the session “Women in Breakbulk: Defining the Roadmap to Overcome Barriers Facing Women in the Industry,” the closing session of Breakbulk Europe Connect21 on May 20.

Women in Breakbulk has been developed with the EU Maritime Women Organization and its global women’s research partnership with WISTA International. WISTA is an international organization “combining ladies and shipping” in more than 50 countries, said Claudia Ohlmeier, president, WISTA Germany; head of section class systematics, data and operations center, DNV.

Sue Terpilowski OBE, president of WISTA UK, and director of Imageline, introduced the project with Breakbulk earlier this year. She worked with Maritime UK to set up the Women in Maritime Task Force, which led to co-chairing the Diversity Task Force, “because what we found was, if you change something for women, you’re actually changing the culture within a company for everybody.”

She added: “There’s a shortage of women, but there’s also a shortage of opportunity for those people to take up jobs in the industry,” so the industry challenge is to be more welcoming in bringing women into the system.

Ingrid Vanstreels, board member of WISTA Belgium, and business development advisor of the Port of Antwerp, said she had spoken with WISTA members in Belgium about the question. “Our conclusion is no; we don’t see barriers today. She did acknowledge there are different circumstances outside of Europe in terms of openness to the employment of women.

“I must admit that during my career, which is already 15-16 years, I never felt blocked by being a woman,” she said. “Of course, you have to be strong because you notice that a lot of managers and directors are male. But if you get the chance to prove yourself, it should not be a barrier.”

Vanstreels did say that, within Europe, there are factors that “look like a barrier for women” in terms of attracting young people to the industry. Perhaps foremost is that young people are unaware of the shipping employment opportunities that exist.

Though Belgium houses the Port of Antwerp, the second-largest port in Europe, local young people are unaware of the port or its wealth of employment, she said. At the maritime school within the port, women represent about 15 percent of new starters.

Christel Pullens, president of WISTA in the Netherlands, and managing director of Sea Ranger Service, agreed. Children in school are not exposed to role models in these professions. “We need to educate them about our industry and possibilities for women as a career path,” she said.

Terpilowski sees two sides. Making younger children more aware is vital as studies have proven that career choices begin around the age of 8.

However, she sees bias, and the stigma of “we’ve always done it this way.” Men have always been in certain roles and businesses are frightened to change.

While the panelists largely agreed that men and woman share opportunities to begin within the industry, advancing can be a different story.

Pullens recounted times when she “needed someone in a decision-making role” to support her candidacy.” Often, she found herself as the “second candidate” behind a male candidate. The female hire would be considered a risk, with employers fearing how customers or how the rest of the company would respond, so the male was the safer bet, regardless of qualifications.

“You really need someone within the company who is willing or daring to take that step. And only then, can you demonstrate that it actually works,” she said.

DNV’s Ohlmeier said she has seen both sides: women who have had support in their career and those who have struggled. She noted that men and women are different, “which is good because that is also diversity and that helps us find different ways.”

One difference is how men and woman approach seeking promotion or advanced responsibilities. While apologizing for stereotyping, she explained: “A man says, ‘I've done this. I’ve heard about this, good. Never heard about it but sounds interesting. Oh, I'm the perfect candidate.’ Whereas the woman is like, ‘Oh I did this for 10 years, but am I an expert? I’ve never have done this so no I'm not qualified for the job.’”

Terpilowski noted a PriceWaterhouseCooper study that looked at its international graduate program and the gender split of new employees entering the company. “Males seemed to progress greatly and the women diminished to almost zero, and they tried to find out why.

“It came back to exactly what Claudia said: the males were going for jobs because they thought, ‘well I can do 50 percent to 60 percent of it and I can learn the rest on the job.’ And the women weren’t,” Terpilowski related.

In the PwC exercise, supervisors were instructed to personally inform and encourage any female they considered capable of a position. “That gave the female the confidence because her supervisor thought she was good enough to apply. And that changed the dynamics dramatically to nearly reaching a 50-50 male-to-female ratio,” Terpilowski said.

Mentoring and encouragement is an important part of WISTA’s approach. “We try to encourage each other to apply for a job, even if you feel that you’re not the right person. We also try to attract female students or talk to them to inspire them. We have to behave like mentors,” she said. “Perhaps women don’t do that enough when you work on your own. I think men do that more for each other than we as women do for other women.”

Along with mentoring and support, WISTA and other organizations are developing management training to empower women to compete in advancing their careers.

WISTA the Netherlands worked with the Erasmus Center for Women and Organizations program of Erasmus University to develop a program on female leadership more than a year ago, Pullens said.

“The former president of WISTA Netherlands said for her it was sort of life-changing, because after following that program, she realized that she was ready for the next step in her career and it was time to stand up and go for it,” she added.

WISTA Germany has for three years provided a mentoring program for women from women, Ohlmeier said. One mentor was a former head of a ministry for shipping.

WISTA UK has created a structured program of self-development, mental health, self-awareness and other skillsets, Terpilowski said. Because the pandemic pushed the sessions to Zoom, the organization has pushed the recorded sessions onto their website so they can be accessed by anyone.

As effective as the WISTA chapters have become, the organization still remains a best-kept secret, Terpilowski said, reaching only about 10 percent of women in the industry.

The goal is not only to promote WISTA, but also other organizations including mixed networks, such as YoungShip International and the Shipping Professional Network London in the UK.

While WISTA is women only (men are welcomed at its international conferences) and a “protected harbor,” Ohlmeier agreed that women can also work with mixed mentoring programs and seek out male mentors as well.

In what ways could men become “true allies in the workplace for female advancement,” Breakbulk’s Meredith asked.

Terpilowski suggested two measures. “One is what I call ‘calling it out.’ It's empowering men to be able to say, ‘I don't agree with that, I don't think that was a right comment for you to have made.’ I think that's something that men now are starting to do, and I think we should be supporting them when they do it.”

Another option is speaking out against perceived gender bias. “For instance, if a male who’s invited to speak a conference cannot make it, instead of just saying no, say, ‘well, I can't do it, but my female colleague can, I highly recommend her. She'll be a fantastic speaker for you, and she could do it.’

“You're promoting them without actually doing very much. There are ways that you can just change cultural behavior in small ways that have a big impact,” she added.

Pullens said she has heard of men who no longer agree to participate in a panel discussion if it’s male only. “Those are the kinds of allies we need.”

She noted that WISTA the Netherlands has developed a list of members who are interested in speaking at events, and they are shared with all speaker inquiries.

Terpilowski said the Maritime UK website has a speaker bank of willing speakers, including industry areas and technical subjects, as well as people willing to speak about gender and diversity. As proof of its value, when the Ever Given grounded, the BBC reached out to her from the bank, and she was on the national news.

WISTA has also run a public speaker program to help build confidence and to speak effectively, she added. Further, the UK organization will send members to attend a woman’s first speaking engagement for encouragement.

Vanstreels and Pullens brought up a more delicate issue: workplace issues with a questionable male culture, which can impact everything from forward or inappropriate behavior to company and customer events being very male-centric. For them, tact, creativity and humor are valuable tools in addressing behavior.

“I’ve asked someone in my team once if he could give me the phone number of his mom, because she still had to finish off a few things in raising him properly,” Pullens said.