Rules and Regs: Pest in the Hold

Industry stakeholders are calling for more measures to mitigate increasing risks of invasive species being carried in packing and bracing materials used in global project and breakbulk cargo shipping.

Amid heightened awareness of microbiological risks in the world of Covid-19 and the reality of ever-growing global trade presenting increasing opportunities for inadvertent pest incursion, greater scrutiny is being drawn on relevant practices and standards.

Faith Campbell, environmental advocate with the U.S. Center for Invasive Species Prevention, said it is “clear” that the threats presented by pests transported into native ecosystems are “global and urgent.”

“The procedure required by ISPM 15 [International Standards for Phytosanitary Measures No.15], was never adequate to curtail pest introductions,” Campbell said to Breakbulk.

“A study of imports of stone from China into Europe by Eyre et al, showed the same proportion of shipments harboring pests to be in wood bearing the ISPM 15 stamp – this indicates to me that the problem is global.”

Campbell believed there are three possible reasons why such infestation could be taking place:

• The wood was never treated but the provider/exporter stamped it – “this is fraud.”

• The wood was treated but the treatment did not work – “this could result either from carelessness/negligence by the provider or from a mistake.”

• Wood was treated but the treatment was inadequate.

“U.S. government inspectors tell me that dunnage is more often in violation because of a pest presence; crates and pallets because they lack the stamp. I know U.S. importers think the treatments are inadequate when it comes to large pieces of wood – as dunnage often is. This might explain why pests are present in dunnage.

“As far as I know, no country is undertaking serious studies to try to sort out the relative importance of each of the possible reasons. I consider this failure to pursue the causes of infested but stamped wood to be negligence on the part of the National Plant Protection Organizations, or NPPOs.”

Campbell said that the problem of stamped but infested wood is widespread, and the highest numbers of non-compliant wood intercepted by U.S. inspectors come from Mexico, China and Turkey.

“In past years, Italy and Costa Rica also ranked high in interceptions at U.S. borders. In the case of Italy, the pests were usually snails on crates carrying marble or tile. Of course, snails are not a violation of ISPM 15 because it applies to designated families of insects; however, snails are a significant phytosanitary threat,” she said.

Recognizing the vital importance of focusing on the threat of invasive pests to natural resources across the world, the Cargo Integrity Group, or CIG, has called on actors in global supply chains to take “urgent action.”

CIG, which was formed by five global freight transport organizations, said that otherwise the International Plant Protection Convention, or IPPC, may itself take “all-encompassing, internationally-imposed steps to mitigate such risks.” 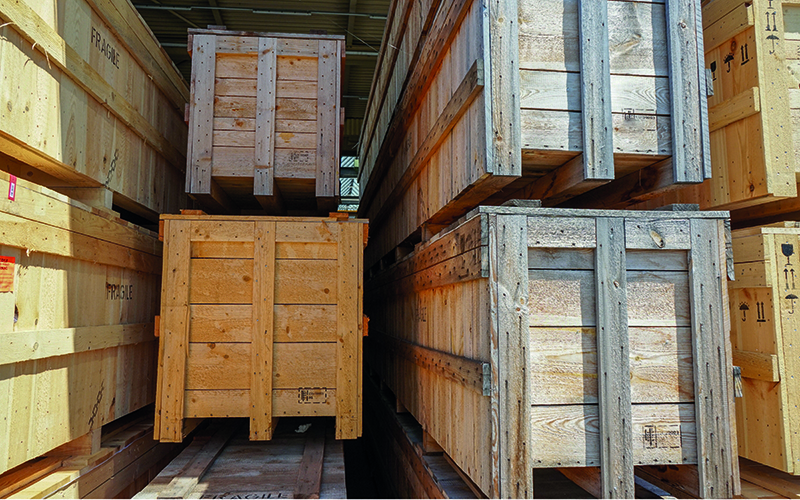 Such measures could have significant impact on global trade when it comes to both time and cost, noted the CIG.

“The prompt now is generated by a heightened awareness of the risk of visible pests being moved through the international supply chain and the potential damaging effects of invasive animals and plants being unwittingly introduced to other countries,” he said. “Greater awareness will lead to greater understanding of the challenge and how individual businesses and industries could have a positive impact on improving current practices.”

Yarwood drew attention to the following statement within the United Nations’ declaration of 2020 as the International Year of Plant Health: “The year is a once-in-a-lifetime opportunity to raise global awareness on how protecting plant health can help end hunger, reduce poverty, protect the environment and boost economic development.”

While acknowledging the recent CIG call to action had a particular container-shipping focus, Yarwood said the sentiment is equally applicable to all international trade – including breakbulk.

“Similar risks and principals exist. The risk continues to exist with dunnage, crates, packaging and potentially the cargo itself, depending on how and where it has been manufactured, stored, prepared and transported.”


‘Marathon, Not a Sprint’

Richard Steele, chief executive of the International Cargo Handling Coordination Association, said his organization and fellow CIG partners are aware that this is a marathon, not a sprint. “Many involved in the supply chain are still learning about the challenges associated with invasive pests and what they can do practically to prevent their spread,” he said.

A key part of the CIG Partners’ work is to raise awareness of the guidance in the Code of Practice for the Packing of Cargo Transport Units, or CTU, Code and Quick Guide. While the demands placed on shippers mean that the CIG is competing for airtime among a range of priorities, Steele stressed that this is not just about shippers, it is about working together at all stages of the cargo supply chain.

“No one actor alone can deliver what is needed. If we only spotlight one part of the chain, we limit our opportunities to succeed,” he said.

James Hookham, director of the Global Shippers Forum – another CIG partner – emphasized that appropriately-heightened biosecurity measures should not come at the cost of unduly hampering or burdening global trade. “Some of the businesses most likely to be impacted by an invasive species are often among that nation’s biggest exporters – i.e., shippers – and supporters of stricter biosecurity controls,” he said. “However, most governments that are battling this issue recognize the impact on trade if biosecurity measures are too onerous and expensive to comply with. Hence the need for risk assessment and cost effectiveness of any global measures that are introduced.” He called for a more proactive program by governments to highlight the issue and the ways of avoiding it.

Yarwood added that certain national governments are already demanding more rigorous action and proposing regulation, either nationally or internationally, to prevent the unwanted and generally inadvertent transfer of invasive plant and animal species.  “Should joint government/business activities be deemed insufficient or ineffective, mandatory requirements will almost certainly load disproportionate – and unwelcome – compliance and enforcement costs across the industry,” he said.

• NPPOs of importing countries should penalize violators for each violation. “ISPM 15 was sent to IPPC member countries for their adoption 19 years ago – it is time that countries were serious about it.”

• NPPOs of importing countries should complete studies to define the relative importance of fraud, misapplication of treatments and inadequacy of treatments in causing the continued presence of pests in wood marked as having been treated. “While the chance that any particular piece of wood harbors live pests after purported treatment is small, the huge volumes of packaging in global trade means that the cumulative risk of pest introductions continues to be too high. Once these studies have been completed, the IPPC parties should adopt measures to fix the problems identified.”

• Importing NPPOs should apply their rights under Section 5.7 of the World Trade Organization Sanitary and Phytosanitary Agreement to immediately prohibit wood packaging from countries with records of exporting non-compliant wood packaging. “Those countries would be allowed to use crates and pallets made from such alternative materials as plastic, metal or oriented strand board.”

• If the IPPC parties fail to act, importing NPPOs should begin the process of adopting their own, more protective, regulations on a permanent basis. “This step would require that they cite the need for setting a higher ‘level of protection’ and then prepare a risk assessment to justify adopting more restrictive regulations.”

• NPPOs should find more effective means to inform shippers of which suppliers reliably provide wood packaging that complies with ISPM 15 requirements. “The current practice of NPPOs communicating with each other is not leading to the necessary improvements.”

Campbell also noted a proactive initiative by importers in Houston, Texas, aimed at improving compliance with ISPM 15. There an informal coalition of importers and the Cary Institute of Ecosystem Studies plans to hire employees of international inspection companies, which already inspect cargo for other reasons at the loading port.

“These inspectors would be trained to inspect the dunnage at the source of shipments to identify – and reject – suspect dunnage before the shipment is loaded,” he said.

And amid all this, it appears biosecurity issues are increasingly on the radar of breakbulk carriers. Last year, Mitsui O.S.K. Lines, or MOL, became the first Japanese line to be certified under the Australia Department of Agriculture’s Vessel Seasonal Pest Scheme. In a statement, MOL said as a sustainably-growing company contributing to Australia’s social and economic growth, it has an ongoing commitment to initiatives that reduce pest risks to the nation’s agricultural industry. Following in MOL’s footsteps, breakbulk cargo movers across the modes could lead from the front when it comes to eradicating unwanted passengers on cargo packing.

Photo 2: Biosecurity issues are increasingly on the radar of breakbulk carriers. CREDIT: SHUTTERSTOCK