Topsy-Turvy of Pandemic-Era Trucking Not Over Yet 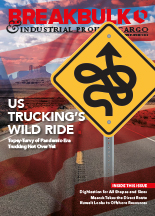 Supply chains of every type have been stressed nearly to breaking point. U.S. trucking has seen record-high rates and demand, with capacity shortages in some markets. Motor carriers and their partners continue to try to expand capacity but efforts are being hampered.

While navigating through the hullabaloo is a challenge, John Esparza, president and CEO of the Texas Trucking Association, representing 700 motor carriers of all shapes and sizes, said he hasn’t seen any capacity issues yet. “I still see long waits for equipment. Motor carriers have more business than drivers and equipment,” he told Breakbulk.

Trucks move about 10 billion tons of freight per year in the U.S., about three-quarters of total domestic tonnage shipped, according to the American Trucking Association, or ATA.

There were 37.9 million trucks used for business purposes in the U.S. in 2019. There were almost 4 million Class 8 heavy trucks in operation in 2020, and they traveled more than 300 billion miles and consumed close to 50 billion gallons of fuel, according to ATA.

Most motor carriers – more than 97 percent – operate fewer than 20 trucks.

The U.S. Department of Transportation’s Federal Motor Carrier Safety Administration reported that, as of February 2021, there were just short of a million for-hire carriers and almost another million private (and “other”) carriers.

U.S. trucking rates are elevated. DAT Freight and Analytics, or DAT, expects record-high spot rates and volumes to continue, according to its 2022 Freight Focus: The Transportation Logistics Outlook.

Flatbed freight rates, according to DAT’s July 19 report, averaged US$3.35 per mile, down slightly from June. The rates vary throughout the U.S., and were highest in the Southeast, at US$3.68 per mile. That contrasts with the lowest rates in the western states, at US$2.69 per mile.

Similarly, the Cass Transportation Index Report advised that although the trucking industry went through a “soft patch” for shipments in June 2022, the expenditures component of the Cass Freight Index, which measures the total amount spent on freight, rose 8.8 percent month over month. It reached a new record high, with shipments down 2.7 percent and rates up 11.7 percent.

Overall, expenditure levels were up 25 percent over June 2021 levels. However, Cass reported the rate of increase has been decelerating over the last few months. “We estimate roughly 10 percentage points of the [year-over-year] increase are currently due to fuel prices alone,” reported the June Freight Index release.

The rise in truckload rates is about to slow, according to the Cass Truckload Linehaul Index. “After an extraordinary truckload rate cycle, the market balance has shifted, with capacity now growing briskly and demand falling, which will limit further upside in the … Index and likely press it lower in the coming months.”

Sean McNally, vice president of public affairs for the ATA, described the two largest expenses for U.S. trucking companies as labor and fuel. “Because of the driver shortage, wages have been steadily going up and fuel prices have hit historic highs this year pushing expenses up,” he said to Breakbulk. On top of that, many other costs associated with trucking (i.e. insurance, tires, parts, truck and equipment) are also rising.

The fuel price issue has hit all carriers heavily but not equally. U.S. diesel rates vary considerably by region. The South Central and Southeast regions showed the lowest prices on July 18, at US$5.08 and US$5.34 respectively, and California the highest at US$6.52.

Looking ahead at expenses, industry is cautiously optimistic, as usual, according to Esparza. “You have to be that way to go into every day, week, month. The industry doesn’t get too excited when they are making money hand over fist, or when they are sucking wind at the bottom of the drain,” he said.

Nevertheless, motor carrier spending behavior has changed. “If they had planned on buying 40 trailers and now see interest rates climbing, they might just invest in their current equipment to make it last another few years. The industry understands how to survive when there is chaos all around.”

In addition to equipment costs, Cari Woitalla, director of projects at Minnesota-based hauler Anderson Trucking Service, or ATS, said operating expenses are also being substantially impacted by maintenance costs, down time (especially waiting on repairs), the cost of living on the road, and the long lead on availability of new equipment.

When project shipments rise, truck availability may get pinched, but the diversity of the breakbulk and project markets offers protection.

Commodity shipments are an offset. For example, the American Iron and Steel Institute, or AISI, reported that during the last week of July 2022, U.S. steel output fell from 1.88 million to 1,73 million net tons, more than 7 percent as compared with the same week in 2021. That equates to a loss of almost 5,000 truckloads of steel per week, and perhaps 50,000 truckloads this year over 2021.

AISI figures reflect regional disparities, with the most significant reductions in production volume in the Northeast and Great Lakes regions. There was a minor increase in production in the South.

In its Aug. 3 Flatbed Report, DAT identified a tightening of flatbed capacity in a number of U.S. markets. Flatbed rates were up and capacity down, for example, in the “north to Houston,” California, and “northeast to Salt Lake City” markets. Nevertheless, “flatbed load post volumes last week … remain 39 percent lower than the previous year. Compared with the strong flatbed markets in 2018 and 2020, load post volumes are 6 percent and 4 percent lower, respectively. Flatbed equipment posts remain at record highs for this year and are even 55 percent higher than this time in 2018. As a result, the flatbed load-to-truck ratio decreased by 3 percent to 19.59,” in the last week of July alone. The ratio started the year at close to 90.

In Texas, demand for oilfield loads, project cargo and other heavy hauls remains strong. The Texas Department of Motor Vehicles, which tracks specialized cargo permits, said that as of the end of July permit issuances are up incrementally over last fiscal year.

Then there is the outlook for new capacity. Orders for new Class 8 trucks and tractors in July fell year-over-year, according to ACT Research. Preliminary Class 8 net orders in July were 11,400 units.

Taking into consideration a six-month industry-build plan, a backlog timing analysis, and historical data, the weak orders posted in ACT’s monthly State of the Industry: Classes 5-8 Vehicles report for July might lead industry observers to worry about the end of healthy demand. But, Eric Crawford, ACT’s vice president and senior analyst, reported the Class 8 backlogs stretch into 2023, that some supply-chain issues will continue, and that inflationary cost pressures aren’t pushing OEMs to open order books for 2023.

“In light of this confluence of factors, plus typically challenged seasonality in Q3, we hesitate to extrapolate too much from a datapoint that could prove to be an outlier. To be sure, though, it is a datapoint that warrants increased vigilance going forward,” Crawford said in ACT’s Aug. 2 statement on July orders. Continued tight truck capacity should keep rates in check, especially spot rates.

ATS typically uses Class 8 sleeper-tractors. Woitalla said the industry is still a long way from having a comfortable level of availability across all ages and classes of on-highway sleeper-berth tractors.

“We’d define healthy supplier/buyer relationships to be inside an 18- to 22- week lead time. We have not seen Class 8 sleeper-tractors in that range for some time. If the first buyer retains a unit for 48-60 months, the re-buy is four or five years. We entered 2020 (Covid-era) with extended production lead times beyond what could be defined as a healthy relationship,” she said.

It hasn’t improved yet. The extended lead times continue. “So for half of the first owner’s expected truck life, we’ve been in high demand/lowered supply of Class 8 sleeper-berth tractors. There are at least three consecutive years of pent-up replacement demand, using the historical cycle,” Woitalla told Breakbulk. She noted that all of ATS’s historical OEM partners have limited build slots, repetitive price increases, surcharges, cancelled or delayed firm orders, equipment offline incomplete, and equipment not built with ATS’s specifications.

“Continued huge dollar increases and limited build slots are still in front of us,” Woitalla said.

The global semiconductor supply issue is also negatively impacting commercial truck production, but one solution is in the works.

The ATA was delighted. “Semiconductors and computer chips make our economy and industry run – right down to the trucks we drive – and we have seen the consequences of decades of neglecting domestic manufacturing of these critical components,” said Bill Sullivan, ATA executive vice president for advocacy.

Given the vagaries of production, loads available, supply chain disruptions, trucking capacity by type, and rate fluctuations, industry analysts are doing well to separate the wheat from the chaff and see a path forward.

“From our perspective, we believe that some capacity may be coming out of the industry as the spot market softens and returns to a pre-pandemic level with contract freight, which may hurt some smaller and independent fleets (particularly with elevated costs for equipment, fuel and drivers),” ATA’s McNally said to Breakbulk.
Woitalla said, with active equipment aging out, industry developments like the discontinuation of one of Freightliner’s big-haul models, and new tractor lead times being longer than in the past, capacity issues are likely to be shortfalls.

Thomas Corsi, professor at University of Maryland’s Robert H. Smith School of Business, said, when asked if record rates could spark a capacity glut, that he has seen some softening in rates, but: “I wouldn’t think this environment will lead companies to make an over-investment in capacity.” In fact, he anticipates slower growth in the market going forward, and for the driver shortage to continue for some time.

Corsi also said that as we look to the future, the diversification of equipment with driverless trucks, EVs and other innovations may have a more extensive impact on capacity and rates.

Esparza added: “If we are in a glut, it is a soft one. The [cargo] numbers from our ports and border crossings are strong. A lot of freight moves through Texas. We can count on the thirst for freight to continue. How we respond is what I worry about the most. The driver shortage is still a problem. We don’t have enough people in the work force. Generations of folks are retiring.”

If higher-than-normal rates have attracted more trucking capacity to any sector of the market, recent order production issues may be a lucky break. When there is too much capacity, carriers go bankrupt. Trucking industry economics that help cargo arrive in good shape, on time, and on budget, is what shippers and project developers want. Economics are the challenge today, keeping planners on their toes as the markets continue their wild ride.


Based in the U.S., Lori Musser is a veteran shipping industry writer.